As you may or may not remember, after moving to le ghetto, I decided to quit my fancy gym and go to the one at my work for literal pennies instead. For the most part, the transition has been easy, especially since I'm saving a ridiculous amount of money, but there are some key differences between the two:

Clothing
Old gym: Clothing brands ranged from Target to Lululemon, but people were always in workout clothes.
New gym: Anything goes. You got a few minutes in between class to work out but you're wearing a dress? That's fine! Aint no thang. The other day I watched a woman run on the treadmill in jeans and a polo shirt. 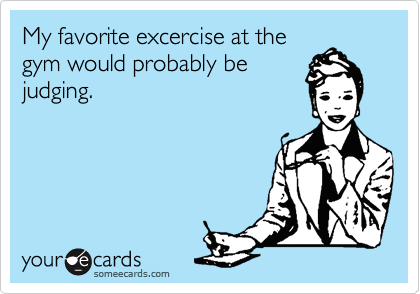 Locker room
Old gym:  They served you fucking CUCUMBER-INFUSED WATER right outside the SPA area. Old women would literally blow dry their bushes CASUALLY next to you.
New gym: You will never not take a cold shower. Never not. There is no time to loiter naked because it's so M-F cold.

Cleanliness
Old gym: There were stations of disposable wipes all around the gym. Everyone used them.
New gym: There are stations with paper towels and disinfectant that I've never seen anyone even look at. I think I'm the only person who has ever wiped down his/her machine there. Ringworm feels inevitable at this point.

Music
Old gym: The same classical CD over and over and over again. They often played Swan Lake which just gave me terrifying day-mares about Natalie Portman. (Okay, maybe they were more like fantasies.)
New gym: They play the dopest shit because it's run by actual 18-year-olds. I recently went up to the front desk to ask about the playlist and the ~kids~ got all nervous because they thought I was going to reprimand them for playing hip-hop. Never, little ones, and also, thank you.

Clientele
Old gym: All women, mostly privileged, with little to no self-awareness.
New gym: All ages and sexes. This makes working out  more enjoyable because I can gawk at men with beards who also happen to attend one of the most elite universities in the world. GET AT ME, BRO. But seriously, do that.