Hahaha, I'm laughing out loud at the idea of my writing this, since you know: 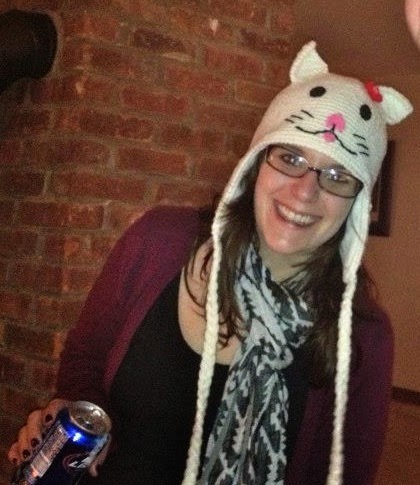 But, apparently, readers like to know where bloggers get their clothes and make-up and how they do their hair. I'm assuming this really only applies to bloggers who care about what they look like and also post pictures of themselves standing in front of a mirror in their office's bathroom with the caption #OOTD, but I need something to write about, too, you guys! So let me tell you about what I use to accomplish that look above.

Soap: I recently made the switch from body wash to bar soap and I am not turning back. I know you're judging me a little bit. Who uses bar soap other than your grandparents and inmates, right? But listen, it's great. I used body wash for the greater part of my life because that is what women do, but I also always felt a little disgusted by loofahs, as everyone should. Think about it -they just sit in your damp, warm shower all day growing fungus and then you pour some scented chemicals on it and rub that shit all over your body. That's fucking gross, you guys. Admit it. Now, I actually feel clean when I get out the shower. This is a feeling I actually never really knew before because I was washing myself with fungus for so long.

Lotion: I'm obsessed with lotioning. One of the best things about living alone is that I can casually walk around my apartment naked after applying lotion and just let it really sink in. Lotioning is very important, ladies. Lotion daily. Lotion always. And this is where you can make up for not using body wash because lotion smells good and makes your skin soft but you're still actually clean underneath.

Make-up: I buy all of my make up at CVS because I am middle-class and reasonable. What are you guys doing spending all that money on MAC? No one can fucking tell what you're wearing.  My eye liner costs literally $3. I'll probably get some kind of eye disease later in life from using it, but it's $3!  Worth it. I do splurge on lip-stick, however, mostly because I like to get it from stores that let you try it on first, which you absolutely cannot do at CVS - trust me on that one, I've been reprimanded by CVS employees more than once.

Nails: The other day, multiple people commented on how great my nails looked, and I was like "$1.99, son". Or something along those lines. I started doing my own nails in January when I finally recognized what a M-F waste of money it is to get manicures (which I used to get, nearly weekly, for many many years).  I confess that I have to paint my nails 2-3 times a week in order to keep them looking good, but I have a lot of time on my hands these days. There is a pun in there somewhere.

Hair: The secret to my hair is not giving a fuck. I wash it and condition it and sometimes maybe I'll even brush it, too. Sometimes. I operate under the belief that not brushing my hair makes it look better, but perhaps it's just that laziness prevails over all. I will say the downside of this method is that I'll probably never experience the romance of someone running his fingers through my hair since they would just get trapped in there.

Clothing: Almost every day, I wear some combination of a t-shirt and blazer look. That t-shirt could be an actual t-shirt, or it could be a dress, but whatever it is it probably cost less than $15. Here's my fashion tip: everything I've purchased from "nicer" stores like Banana Republic, for example, has fallen apart in less than a year, so why not just buy something cheaper that will also fall apart in less than a year? Pure economics.


Accessories: None of my ensembles are complete without cat fur (or a cat hat).  But seriously, that shit is relentless. All the money I save on make-up goes toward lint rollers and, still, I'm covered in fur. Consider it endearing.

The bottom line here is that I'm cheap. But also: