I've unsubscribed from Weight Watchers emails three times now, and yet, I'm still hearing from them. I tweeted at them to leave me alone, and they requested that I DM (direct message) them for help. For those of you not on twitter (what? why?), you must be following someone in order to DM them. So, essentially, I would have to increase my connection to WW in order to be unsubscribed. Yes, I know I could immediately unfollow them, but this is about principles! STOP FUCKING EMAILING ME. If WW had a better customer service system in place I'd feel less inclined to write this post about their program, but now I'm annoyed. And when I'm annoyed, I turn immediately to social media because I'm a millennial.


I was overweight for most of my life, and that's just how it was. That is not to say that I was happy, more so resigned. But, after I graduated college and moved to Boston, I decided it was finally time to lose weight. At that time, I was over 200 pounds. Please know that it causes me physical pain to write this, but I'm doing it. For you. And so Weight Watchers will get off my shit.

I was already a member of a gym - being physically active has not generally been a challenge for me. My problems revolve mainly around cheese and all the emotions I attach to it. So, I needed to start focusing more on eating "healthy", aka less. I decided to join Weight Watchers because they hosted meetings at my office -- it was convenient and I had heard it works. On the Weight Watchers program, every food is assigned a points value. You are allotted a specific amount of points each day (based on your weight/height, etc.) and you are expected to track everything you eat. It is, in its most basic form, another version of counting calories. Now, everyone knows that if you burn more calories than you consume, you will lose weight. It's science. So, a diet that is based on this equation, such as Weight Watchers, is, more or less, proven to work. And it worked for me. I lost roughly 80 lbs and thus became "healthy". Except not really. 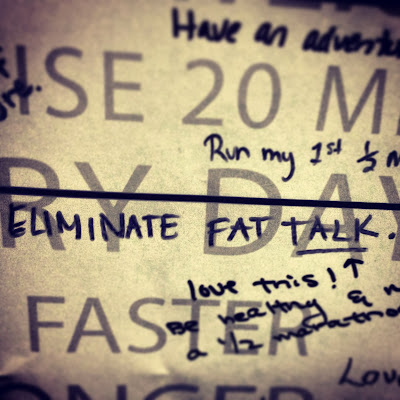 Perhaps some people can count points or calories without going crazy, but I am not one of them. Although Weight Watchers helped me lose weight, it also helped me develop disordered eating. Even though I haven't been on the program for years, everything I eat, or even just look at, is still assigned a number. On the program, I felt so bad about myself when I exceeded my points allotment for the day. Why didn't I have more self-control?!  I would then try to compensate for my mistake by eating almost nothing the next day. 80 calorie lunches were a real, far too regular thing. At one point on the program, bananas had a higher point value than most fruits, so I felt bad about eating those, too. BANANAS! It was insane. And now so am I.

I still often experience this cycle of guilt. It's not only destructive mentally, but also physically. For the record, you cannot, and will not successfully lose weight if you are bingeing and fasting, or fad dieting, or generally spending all of your time worrying about food. You also can't be happy.

For the past year or so, I've been actively working on changing the way I think and feel about food, and let me tell you, it's extremely difficult when you have such demonizing thoughts in your head (and when Weight Watchers is constantly reminding you via email that you're still not thin enough).  But I think it is worth it. Being at a healthy weight is no fun when your brain doesn't let you appreciate it. I just want to have a scoop of ice cream and not think about it for the rest of the day! Seems reasonable, right? So, next time you try to lose weight, think about why you're doing it. Is it to be happy? Because your weight really has no effect on that, trust me.

I recognize that for some people (including my previous self), losing weight is critical to their health. However, I don't necessarily believe dieting is the best way to do it.  It's interesting to consider that as dieting and diet foods have become more popular in the U.S., so has obesity. Perhaps the answer to losing weight is not limiting food, but allowing it.

Earlier this month, I began a personal campaign to end fat talk. To enjoy food without examining its caloric value first. To concentrate on being happy, not being thin. I hope you will join me.
Posted by Katie Qué at 10:28 AM