When people say women aren't funny, I assume they have no sense of humor. Or are just assholes. They're also probably the kind of people who think they're hilarious because they can quote a Will Ferrell movie. I mean he's funny, but that doesn't make you funny, you know?

The other night, I was watching VH1's Women of SNL special, which I've seen no less than 10 times and never get bored of. I mean, the ladies kind of own that show, am I right? So amazing. I want to be like them, as well as many other female comedians who are just brilliant in every sense of the word.

These are my heroes:

Tina Fey - Duh. But, for the record, we have a lot more in common than our glasses.

Kristen Wiig - I wish I could make my face look like yours, especially when you're doing this:

Sheri Oteri - WHERE ARE YOU  NOW?!  This is possibly my favorite SNL sketch of all time:

Megan Amram - Probably my favorite thing to come out of Harvard (and onto Twitter): 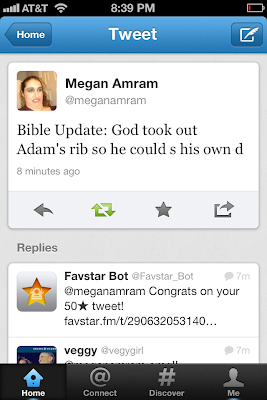 Mindy Kaling - We have the same body type, and according to your television show, men are attracted to it. And last but not least, the one and only...

Sarah Silverman - Technically, she was a writer for SNL, but her skits never got chosen. Whatever, Sarah, I think you're perfect in every way:


Thank you for inspiring me always.
Posted by Katie Qué at 10:57 AM