In lieu of a Things I learned this weekend, I'm just going to review the JT/JZ concert I went to this weekend. Did you guys know I went to that? I only posted about it on Facebook and Twitter like 100 times just so that everyone would know that my life was most likely better than theirs. So, hope you caught that. 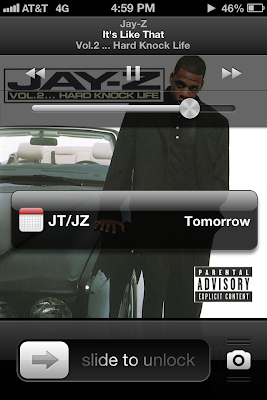 As I'm sure you would expect, the show was INCREDIBLE. I felt so many emotions. I spent the majority of the concert trying not to pee my pants out of excitement (and also because I drank a lot of beer). However, I am going to make a controversial statement and say that I would have liked the show just as much if JT didn't even show up. I'M SORRY, EVERYONE. Jay-Z was off the chain. (Does going to a Jay-Z concert entitle me to use that phrase? I hope so.)  Seriously though, so M-F good. And I finally got to live out some of my teenage dreams. For those of you who don't know, I started listening to Jay-Z in middle school, during which I also had cornrows and wore Allen Iverson's number on a necklace, so. That's not even a joke, you guys.


Anyway, not only did it become apparent that I care way more about Jay-Z's music than I do Justin's, but I also realized that Jay-Z is a much better performer. Justin made the crowd sing at least half of all of his songs, and I was like, um, isn't this what I'm paying you for? Also, not that Jay-Z is humble or anything (best rapper alive!), but Justin's ego took over too many times when he looked expectantly at the crowd for adoration. This was usually during the times that we were singing his songs. Is there any way I can get a cut of his profits?


Of course, the Boston Marathon cast a dark shadow over the show, as it has over all of Boston since April. Both Jay-Z and Justin paid their respects, so to speak, but it felt weird. Call me cynical (because I am), but there is something very disingenuous about a pop star calling out "Boston Strong" and girls everywhere swooning. And when Jay-Z performed "Heart Of The City," all I could think of was how the marathon bomber tweeted its lyrics right after attacking our city. So, that was a bummer.


But, despite all this (because so far I mostly sound like a whiny bitch), the show was fantastic. And perhaps the only reason why I was so jaded by Justin is because I've seen him multiple times. Because not only did I have cornrows in middle school, I also wallpapered my room with 'N Sync pictures.
Posted by Katie Qué at 10:45 AM