6 Things About Me That You Probably Don't Care About.

Since I have no inspiration these days (you may recall I posted this as a representation of my current state the other day), I've decided to do one of those questionnaire things that used to go around Facebook (remember notes?!) but now go around the blogging "world" because everyone is bored, essentially.  So here it is:

"6 Things About Me (that you probably don't care about but  I needed to post something so that I could say that I posted something)."

1. If you could pick up and move anywhere for 6 months, where would it be?
Probably Africa because I've always wanted to save poor kids. But I also don't want to dedicate more than 6 months of my life to them.

2. How long have you known your best friend?
I don't like this question. I have a lot of best friends. But I guess that's technically impossible considering the definition of "best". Whatever. I've known most of my friends for a very long time, some of them over 20 years (gross!). They've seen me through thick and thin. Literally, though. Did you guys know I used to be fat?

3. What's your number one item on your Christmas list this year?
I don't like this question either. It's racist. Or ethnist? Either way, I don't have a Christmas list; I'm fucking 27 years old. If you're making a Christmas list at 27, you need to reevaluate your life, okay? Also, I prefer latkes.

4. What accomplishment are you most proud of?
Raising the most beautiful cat in the world. 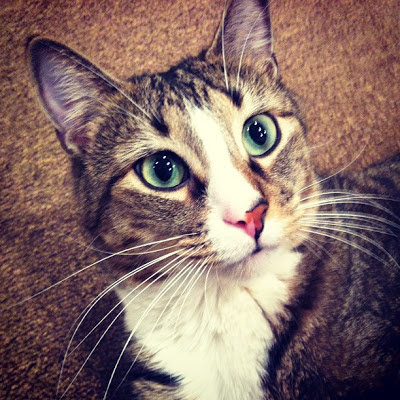 Secondarily, being a first-generation college graduate. And I'm white! Take that, statistics.

5. What did you do last Friday night?
I made magic cookie bars and went to bed at 9:30, but only because I was waking up at 5:30 am the next day to float down the Saco with 20 of my friends and 6 coolers of beer. However, two Fridays ago I ordered cheesy bread and stayed up til 3 in the morning watching Jane Eyre. Alone.

6. How has blogging benefited your life?
Um, well, apparently some guy in NYC has imaginary sex with me now. So that's something.