In case you have been wondering, I wanted to let you all know that my Family Reunion IRL last weekend went swimmingly. Though it was pretty rushed, my cousin, Bridgette, and I had a glorious time together (speaking on her behalf) exploring both Brooklyn and Boston in less than 48 hours.

My weekend began on Friday morning when I got into my rental car to make the daring drive to Brooklyn, which, besides one to-be-told incident, is like any other drive you might make. Since I drive approximately three times a year, and the last time I owned a car was 5 years ago -- at which time I had a '92 Honda Civic that broke down almost every time I drove it and did not have a GPS since that would been worth more than the car -- I am the kind of person who prints out directions and figures out where I'm going before I get into a car, rather than relying on some BITCH robot. Despite the fact that I already told her I knew where I was going, she kept turning herself on to "help" me. Like, leave me alone, lady. I'm trying to concentrate on the road aka my music. 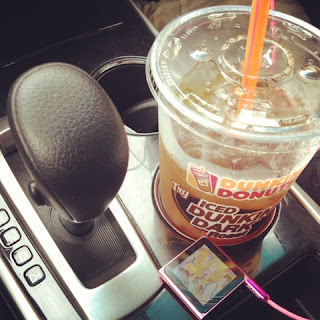 Then again, in her defense, Google Maps led us astray when it told us to take a left-hand turn where you're apparently not allowed to take a left-hand turn, which caused us to a) almost die in a car crash (praise be!), and b) get pulled over by a New York City cop, who seemed to speak no English really, yet reprimanded me for what felt like 30 minutes.  After apologizing over and over again (read: blaming Google), he finally let me go with a disapproving look but no ticket (again, praise be!).

Ultimately, we got to Brooklyn safe and sound, and though it appeared we were staying in the ghetto (the only thing on the street other than our hotel was trash), we were assured by the locals that we were not. (Keep in mind that some of these locals also pretended to call the cops on us because our legs were "too sexy to be legal," so.)

The reason we decided to meet in NYC in the first place was to see The Postal Service. Of course, approximately 2 days after planning this trip, they announced that they would also be coming to Boston, but whatever. The show was awesome, although we basically had the worst seats ever. Who knew Barclay's was so big? Probably everyone. I did not.


As we were sitting down, Bridgette accidentally (and innocently) spilled some beer on the girl in front of her. And, instead of letting it go, the girl made a HUGE deal about it, badgering Bridgette and accusing me of not offering her my "paper-towel", which was actually my computer paper concert ticket. But even if it was a paper towel, I wouldn't have given it to her because, like, relax, girl. Your hair did not look that good anyway.

[This reminded me of the previous weekend when one of my friends spilled some of his drink on some girl at a back-yard, prom-themed party and she demanded that he give her $25 to get it dry-cleaned. First of all, what is dry-cleaning? I am unaware of such luxuries. Secondly, if you can't handle getting spilled on, then, like, probably don't ever leave your house.]

Anyway, the next day, we got real NY bagels, which were everything I hoped for and more (see: bacon scallion cream cheese), and we headed back to Boston. I felt compelled to show Bridgette things like the Public Gardens and Sam Adams' grave, instead of being like, "I've lived here for five years so I know all the cool hidden spots."


Besides the concert, our weekend basically consisted of eating, since I really don't know how else to entertain (or be entertained). While in Brooklyn, we met up with my internet friends turned real friends, Kim and Katie, for meats and cheeses.  I had been told that two of Katie's male coworkers love me (most likely because they don't actually know me), so I was hoping this would be the moment we'd finally meet and fall in love forever (all three of us), but she arrived at the restaurant EMPTY HANDED.

But at least, and even better, she gave me this:


All in all, we had a fun, albeit quick, weekend. It was fantastic to meet and get to know someone (with awesome hair) I'm related to -- not only because I learned a lot more about my family's medical history, but also because my cousin happens to be a wonderful person whom I'd be friends with regardless of our DNA.  Bonus: she lives close to Disney World.
Posted by Katie Qué at 9:47 AM