My blog is dying a slow painful death, ya'll. Ya'll?

Anyway, here are some things I learned this weekend:

1) Happy hour should be limited to an hour or two at the most. 7 hours is far too long. You might end up yelling at your friends about gender equality. 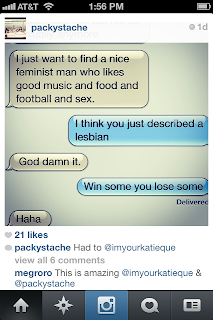 2)  I have more self-control than I think.


3) It's completely unnecessary to order 12 plates of Chinese food for three people. 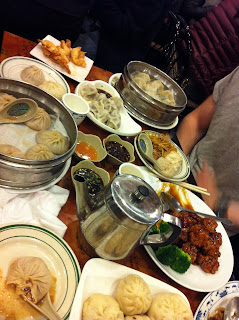 4) After eating 12 plates of Chinese food, you might have to lay down in the middle of Boston Common and cry and moan for a while.

5) Grad school is the M-F PITS when it's nice out. 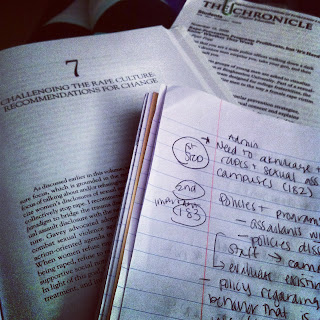 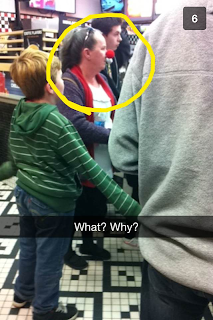 I should just stop talking.

Last night, I logged into my online chat for one of the classes I'm taking (and currently not passing) and immediately forgot that I was in there. These things happen when you have undiagnosed ADHD. As is customary, I proceeded to have an incredibly inappropriate conversation with my roommate about all the incredibly inappropriate things I used to write in my LiveJournal (!) in college. About two minutes into this discussion, I remembered that I was logged into a live online chat with my TA. I said, "Oh my god, am I live right now?", at which point, one of my classmates typed into the chat "Yes!"

I messaged the few people I know in my class "OMG" and "911" to emphasize the urgency. Because I'm never dramatic about anything ever.  My friends said that they could not hear me, so the person in the chat may have been saying "yes" to something else going on, but it's still unclear whether my TA could hear me.  Please cross your fingers for me.

Anyway, like I said, sometimes you just need a cookie, and I definitely needed a cookie right then. So, of course, instead of making up for my idiocy by actually paying attention to the rest of the online discussion, I did this:


I also burned my hands and mouth because I couldn't wait one M-F minute for them to cool before eating them.

I went speed-dating the other night. It was as bad as it sounds. Or maybe not that bad.  It was actually surprisingly boring yet exhausting. I felt like I should have gotten a job or at least a check at the end of the night. Interestingly enough, there are waiting lists for this kind of shit, which means there are many many people out there who truly believe they will meet someone through speed-dating. I think that is probably their biggest problem, but who am I to judge? My major concern during the evening was that the waitress never came to my table.

To prepare myself, I reviewed the website, which advised the women to come early for a "complimentary makeover." This sentence made me want to die a little and so I intentionally did not go early in the hopes that I could avoid being objectified by a "certified cosmetologist." Turned out, though, that the event was actually horribly organized and there was no such cosmetologist present. There was also no explanation about what you were supposed to do. Luckily, I'm a fast learner and discovered quickly that all speed-dating really entails is having the same conversation 17-20 times. Then, if you are interested in someone, you write down his name and number on a piece of paper and give it to a receptionist. And please note that by number, I don't mean phone number, but more like how you would label cattle. ROMANCE.

Despite the fact that I was 100% dreading it, I went into the night feeling confident since a) I didn't actually give a shit and b) people usually like me initially. Initially being the operative word here. Statistics show that my novelty wears off somewhere between 3-5 weeks. So, it seemed like rapid-fire dating would come naturally to me. Then again, I didn't drink much beforehand and statistics also show that people typically ask me out when I'm totally drunk at a party. And then I make them repeat everything they told me at that party on our first date because I was too drunk to remember. It's possible that could have something to do with the whole 3-5 week thing.

Anyway, speed dating was like multicultural night for the socially awkward. I think everyone there worked in IT exclusively. Those people need a support group or something. I'm also pretty sure that I was the least accomplished person in the room. Most of the people I talked to were at least 30 and living in the suburbs in houses they OWN, and I was all like, "Yeah, I live in a basement, so."

One guy asked me what my greatest passion was (he must have googled, "questions to ask while speed dating"), to which I responded, "Eating." This actually led to the most interesting conversation of the night, involving a discussion  about exotics meats.  On that note, have you guys heard of the lion craze happening in Illinois right now? Lion. Like, the king of the jungle. I feel like that's unethical. Then again, I can't say I wouldn't try it, since, you know, YOLO or whatever.

Needless to say, I didn't find my soul-mate through speed dating, but at least I can now cross it off my list of things I don't want to do but will do anyway.
Posted by Katie Qué at 10:12 AM 3 comments:

I'm sure he just lost your number.

I was in the bathroom at a sports bar the other night. I came out of the stall and went to go wash my hands but two girls were occupying the sink area. So, I waited patiently while they discussed gender politics:

Girl #1: Have you ever lied to a guy and told him you liked sports?
Girl #2: No.
Girl #1: Oh, I have. I hate sports! But they really like sports.
Girl #2: No, you can't tell guys you like sports because when they find out you don't, they'll stop hooking up with you.

I was like, you girls are really sad and also can I wash my fucking hands now?

I'm pretty sure no guy has ever hooked up with a girl because she likes sports, or has stopped because she doesn't. More likely, he stopped hooking up with you because of your personality, so. Sorry?

But also, liking sports is not that attractive. See: me crying about football. Or this:

The trouble with blogging is that it's a self-created obligation. I feel like I have to write something even when I have nothing to write about. This seems to be no problem for some bloggers who literally get paid to tell us what they had for breakfast, which is probably the same thing they had the day before. PAID. Fuck it all, everyone. 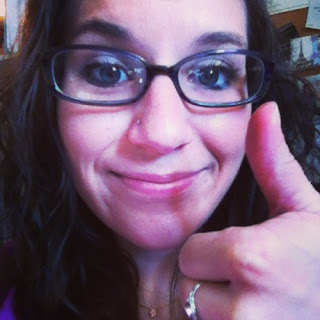 Anyway, since I have nothing important to say (do I ever??), I'm just going to share with you some of my most recent and random thoughts: