That time I went out for coffee and got my nose pierced instead.

Okay, well, that's not exactly how it happened. I did make the decision to get my nose pierced when I walked by a tattoo parlor on the way to get coffee, but then I quickly ran back to my apartment to pick up my roommate for moral support/to hold my hand.

The guy who pierced my nose, Brian, decorated his space with Alice in Wonderland memorabilia, so I felt right at home. I told him I had been considering getting a tattoo of my cat's silhouette but that someone told me it would look a weird birthmark. Brian, however, fully supported it. He also said that he is getting a tattoo of his cat dressed up as Napoleon. Kindred spirits, I tell you.

Anyway, here it is, my debut: 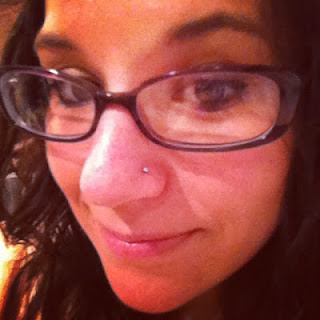 I have to say, getting a needle stuck through your face is pretty invigorating. But also, I hope this is not a mid-life crisis because that would mean I'm going to die at age 52.
Posted by Katie Qué at 10:03 AM