I was recently notified that, on the season 2 premier of Girls, Lena's character dresses up as a Quaker. Does that sound familiar to you any of you?

This is the 3rd *recorded* time that someone who makes way more money than I do has STOLEN one of my jokes.

Instance 1: Circa 2006, I wrote a potential SNL sketch about the Virgin Mary finding out she's pregnant with God's child on the Maury Povich show.


(Except in my version, God actually was the father, and he wasn't happy about it. Neither was Joseph. Trick ass hoe.)

Instance 2: While watching Rudolph this holiday season, I had a revelation that the story is really a social commentary on the plight of the Jews. Think about it. Rudolph is cast out because of his nose; the elf is snubbed for wanting to be a DENTIST. Concidence? I think not.

And neither, apparently, does Andy Borowitz: 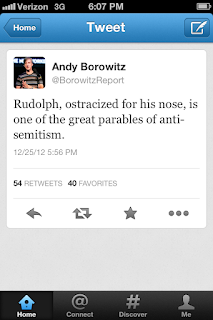 What the M-F fuck?

There are only three possible reasons why this *keeps* happening to me:

1. Celebrities around the world are evesdropping on my conversations.
2. I have no copyrights nor anyway to prove that I said any of these things unless you trust the word of my friends (which you totally should).
3. I'm unoriginal (!!!!)

This is the darkest day.