Where my girls at?

By now, we've all heard about Todd Akin's asinine thoughts on rape and reproduction, and I think we all agree that they were outrageous, uneducated, and wrong. But, on the very small bright side, they have at least invigorated the discussion about women's reproductive rights in America.

Why is it so important to the government to control women's reproductive systems? Please seriously think about that. I understand that it takes two to tango (that's slang for SEX), but legislation around contraception and abortion is used to control, very specifically, women's bodies and choices. In a country whose female representation in government is abysmal, it's incredibly important for voters to understand this.

If this is something that is as important to you as it clearly is to me, I hope you vocalize it. If you need some ideas on how to start, check out this list from Women's Health Magazine's website. Or, you can just make a sign using a box of Crayola crayons and computer paper and then instagram the shit out of it (see above).
Posted by Katie Qué at 10:18 AM 1 comment:

Whenever I tell a girl that I'm going on a date with someone, her immediate reaction is to ask me what I'm going to wear. I don't ever know the answer to that. I rarely ever worry about what I'm going to wear to anything (maybe that's why I often look like a M-F Quaker). But, when someone asks me that question, I start to feel self-conscious, like I'm supposed to worry about what I'm wearing.  Like I'm supposed to wear a cocktail dress to get a beer at 6 p.m. on a Tuesday. I don't want to do that.


I read this "article" the other day about why women shouldn't change their style for a guy. Although the introduction was all about Taylor Swift, whom I could do without entirely, I thought it made some valid points, mainly that no one should really change anything for anyone. I once had a "friend" tell me that I needed to "tone down my personality" because I'm "abrasive" and guys don't like that. (So many quotation marks.) But, if someone doesn't like my personality, why would I ever want to date them, and vice versa? This "friend" also recommended that I "reveal myself over time." So, apparently, I should pretend to be someone I'm not to get a guy to like me and then a few weeks down the line be like, "Surprise, this is who I really am!" That sounds like it would work out well.

People give shitty advice, which brings me to Reason #5 on the list:  "Listening to yourself is better in the long run."   This doesn't only apply to what you wear -- this applies to everything. For example, the next time you're texting a love interest, just fucking do it! Say what you want to say. Say it in your own words. Don't consult six friends to find out whether it's clingy or cute or witty. If you need six people to help you say something witty, then you're not witty, and you never will be. Don't go trying to fool someone.

Unless of course you're an asshole, in which case, you should probably change.
Posted by Katie Qué at 10:03 AM 4 comments:

Fat is the New Single

The other day, I read an article entitled "15 Perks to Being Single." Apparently, I needed a reminder. Or 15 reminders. Unfortunately, though, I didn't find the article particularly helpful. A number of the "perks" involve the opportunity for casual sex, which I don't think is a compelling argument for being single. Has anyone ever had good casual sex? Sorry, let me rephrase that: Has any straight female ever had good casual sex? Doubtful.

Also, number 11 couldn't be less accurate. Eat whatever, whenever?  Okay, I might do that, but do I feel good about it? No. What single person is like, "You know what will make me attractive to the opposite sex? Blowing up like a balloon after eating a block of cheese by myself with my cat on a Wednesday night." (Purely hypothetical situation.)

In fact, I think I am always more concerned about what I am eating when I'm single (see: the last 26 years of my life). I have to keep this svelte body to get the boys' attention, you know. SVELTE BODY. I look forward to the day when I'm comfortable enough in a relationship to gain 10 pounds and not have a mental breakdown. In other words, I want to trap someone so that when I do blow up like a balloon after eating a block of cheese with my cat (he's not going anywhere), it's too late for them to run away.

I totally went nuts last night over the Spice Girls' performance on the closing ceremony. My only complaint was that it didn't last long enough (this is not the first time I've had such a complaint - zing!). Needless to say, it left me wanting more (zing again!). Anyway, judging by my twitter feed, I don't think I'm alone in that feeling. So, now I'm wondering... what we can do to bring them back together forever?! I see a campaign coming your way.

When I was in 6th grade, I was absolutely obsessed with the Spice Girls -- this was something I desperately tried to cover up since I had a feeling it wasn't that cool.  However, one day, a boy from down the street came over to my house and asked me to borrow my Spice Girls CD. Since I desperately wanted friends at the time, I gladly handed it over to him, not realizing that I would never get it back. (Side note: thanks to iTunes, it has successfully been restored.) Fast forward 13 years and this boy is now a drag queen. I feel like I inadvertently played an integral role in his life.

Speaking of girl power, did you know that this year was the first time in history that every country sent a female athlete to the Olympics? Pretty awesome. It's nice to see the world move forward in these backwards times.
Posted by Katie Qué at 10:02 AM 2 comments:

In this video, I discover why it's so hard for me to find a boyfriend. I also say the word "Quaker" a lot.

Editor's Note: According to Google Analytics, no one watches these videos. I'm still going to make them. I'm not sorry.
Posted by Katie Qué at 11:22 AM 2 comments:

The Untold Story of Princess Doe

My friend Christie recently published a book -- The Untold Story of Princess Doe -- and I'm both proud and jealous of her. 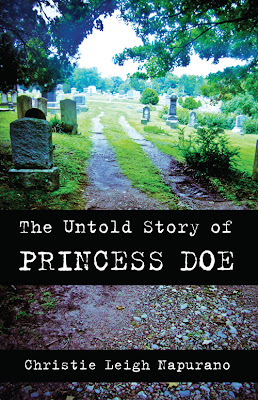 As I mentioned before, I'm really into dystopian literature right now. I also really like magic. And witty romances.  Although The Untold Story is a departure from these genres, it, like many of the books I read,  is quite disturbing and mysterious: It's about a young girl who was brutally murdered over two decades ago, but never identified. And it's based on a true story.

The case of Princess Doe remains open today; after over 20 years of investigation, no one knows who she is or why she was murdered. But, in her book, Christie gives her a name and a story, in all its gruesome details. You can read more about Princess Doe and pick up a copy of the book here: http://www.whoisprincessdoe.com/ . It's a fast-paced read that's perfect for the beach or a train ride, but perhaps not right before bed. I made the mistake of reading Oryx & Crake before I went to sleep and had nightmares about the apocalypse every night. Lesson learned.


So, why am I jealous? I'm jealous because I have always dreamed of writing a book. But, the difference between Christie and me is that she actually did write a book, and I've mostly just thought about it. However, I have at least come up with a few solid chapter titles; for example, "Chapter 8: My Vagina is a Cave." Obviously, it's also going to be based on a true story.  It will also contain a lengthy insert featuring many stunning glossy photos of Boo, such as this one:

So, I made another video. As you can probably guess, it's about absolutely nothing at all; it's pretty much just 3 minutes of me rambling. However, if you can get through it, I promise that Boo's appearance and the software malfunction at the end makes it worthwhile.


Also, in the event that you actually want to watch this, you'll need to turn your volume way up because I apparently don't know how to use modern technology.
Posted by Katie Qué at 10:57 AM 3 comments:

You can't believe it's already August!

I can. And I'm pretty excited about it. In fact, I personally cannot wait for summer to be over. Sorry, everyone.


Summer is the most overrated season of all time. Sure, it was cool in 7th grade when the only thing you had to worry about was how you were going to get to the Barnstable County Fair. But after that, you had to work at a shitty part-time job every summer.  And then after that you had to work a full-time job every summer.  And pay bills. And live in a basement apartment without A/C. And wake up at 7 am after drinking a pitcher of sangria on a Wednesday night because fuck it, it's summer. Worst of all, if you live in New England, you have to deal with humidity, which makes you  a miserable C-word (and also a hypocrite) that no one wants to be around. As soon as you walk out the door, you begin sweating through your white button down shirt and by the time you get to work you look like you just left a Señor Frogs wet t-shirt contest. Professional. And, if you're really lucky, your *company's* A/C will be broken for the 4th time, so your office will be approximately 89 degrees. And you'll sit in it for 8 hours.  Woo, summer!

Thankfully, fall is right around the corner, and along with it comes football, pumpkin, witches, and everything I love. In the fall, I will not be a miserable C.
Posted by Katie Qué at 11:12 AM 2 comments: