As I mentioned a few weeks ago, I have succumbed to internet dating. However, I haven't actually gone on any dates yet. Half of the people I've been connected with on Coffee Meets Bagel haven't completed their profile, so I assumed they were boring and not worth my time. The other half wrote that they "look good in a suit."  Is this important? If we go on a date are you going to wear a suit?  Or, are you saying that I shouldn't expect much since you only look good when you're in a suit? I'm not sure. Either way, it seems irrelevant. And also lame. Is that really all you could come up with to describe yourself? I guess not everyone can be as clever and perfect as I am. 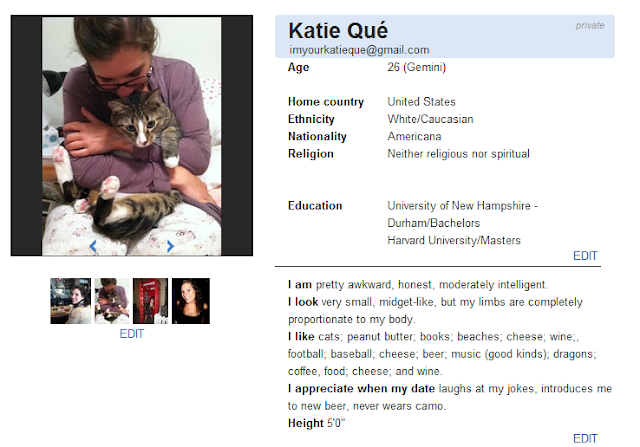 Everyone on the site also seems to really like technology. This could be problematic since someone recently had to explain to me how to take a screenshot.  Also, I find that people on internet sites who "love technology" mostly want to talk to you via email or text so that they don't have to actually see you in person. So that's pretty fun.


But, I'm actually going on my first internet date tonight, mainly because the guy put in his profile that he doesn't like texting. However, that may or may not be all we have in common. In fact, I pretty much know nothing else about him. At first, this seemed great. I didn't have to waste my time texting back and forth about stupid shit. And, since we don't really know much about each other, we should have plenty to talk about. But then, as the date got closer, I started to worry. What if we actually have nothing to talk about because we have nothing in common? What if he's mentally unstable? What if he's a pedophile? What if he reads this post about him? WHAT IF HE DOESN'T LIKE CATS?!

So, I decided that I needed an escape route. That's positive thinking, right? Planning in advance how you're going to get away from someone. Should go well. Anyway, I downloaded this "Bad Date Rescue" app, which can be used "to believably excuse yourself while sparing the other person's feelings" (The Week). Essentially, you schedule an "emergency" so that you later receive a fake phone call which will allow you to excuse yourself and ultimately leave. It's the polite way to totally ditch someone you don't like.
Posted by Katie Qué at 12:07 PM