So, I'm in love with Chicago. It took about one hour of being there for me to come to that conclusion. The city is just absolutely gorgeous. It's clean and everyone is friendly. However, the friendliness is not something I'm used to, nor is it something I adopt. In fact, I involuntarily started talking shit to a White Sox fan on the street because the Red Sox just so happened to win that night. I don't know why I did it, especially since I'm normally talking shit about the Red Sox.

Some highlights from the trip:

1. Sluggers. This is maybe the best bar I've ever been to. Not only does it have a dueling piano bar, but more importantly, it also has batting cages and an arcade. Skee ball + beer = a dream come true. We need something like this in Boston. And yes, I know the Greatest Bar has skee ball machines, but the Greatest Bar is actually the Worst Fucking Bar, so it does not compare to Slugger's. 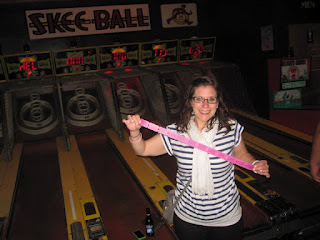 3. The art and architecture. We took an architecture tour, which was awesome. Our tour guide was brilliant and also quite talented. He played a little Chicago Blues for us during the tour. We also really loved the bean. We spent at least 30 minutes there taking photos of ourselves. Hipsters.


4. Garrett popcorn. This shit changed my life. I never thought I cared that much about popcorn. I also never thought I would ever want to eat cheese popcorn in general, let alone combined with caramel popcorn, but god was I wrong. So completely wrong. I want to eat it all day, every day.

While pretty much everything about Chicago was amazing, there were of course a few setbacks (although I would not blame any of them on the city itself):

1. At Sluggers, the best bar ever, a guy came up to me while I was sitting at a table having a nice conversation with my friends. He grabbed my hands out of my lap and started talking to me. I couldn't hear what he was saying so I just said, "Yeah, they're really small," assuming that he was talking about my carni-like hands. (My friend once told me they would be perfect for "reaching into a ferris wheel and fixing it.") But apparently he was not commenting on my miniature hands; instead, he was checking to see if I was wearing a wedding ring. Obviously, I was not, so he tried pulling me to the dance floor, saying that since I'm not married, I have no excuse not to dance.  I could think of  approximately 1,000 reasons to not dance, but I just firmly told him "No." Actually, I shouted it in his face because he would not get the point. He kept grabbing my hands and trying to pull me toward him. Essentially, I was manHANDled. Finally, he left me alone but I still felt the need to duck and cover whenever he walked by.

2. Having to wait two hours for everyone to get ready. Although, this did result in the best picture I've ever taken of myself ever. Something you may not know about me is that I typically spend 2-3 minutes every day making weird faces in the bathroom mirror, so I had a lot of practice for this one:


3.  One night, while we were at dinner, I got up to use the bathroom and this blond woman, who looked like she could be a real housewife of the midwest, stopped me and said, "Could you get me some more butter?" No, ma'am, I cannot because I don't work here. But I can see how you would be confused since the waitstaff is all male and wearing vests and ties and I'm a petite girl in a fucking dress. So, sorry I won't be doing you any favors. And neither will butter. Boom.

Anyway, the whole time we were there, my friends and I were raving about how we want to live there someday. Some of my friends were so excited about Chicago that they started hating on Boston:

Friend (in regards to Great Chicago Fire and the resulting unity): I wish we had something to be proud of like that.
Me: We do. It's called the AMERICAN REVOLUTION.