Anyone can be killed.

Season 2 of Game of Thrones* starts on Sunday. I cannot wait. I've had it written on my calendar for months. I also set a reminder in my phone, as if I would forget. 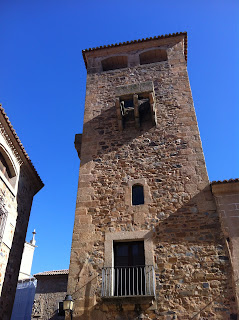 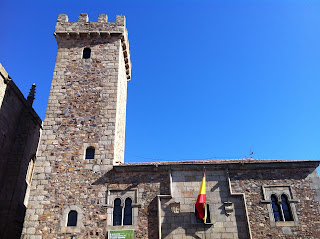 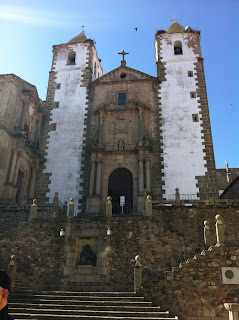 Unfortunately, I didn't see any midgets in armor, nor did I hear any rumors of incest or bastard children. But, that's probably only because I don't understand Spanish.

At least once a week, I say something along the lines of "My blog is over. It's dead." because I can't think of anything to write about.

Clearly, that is a bit of an exaggeration, but it really is often difficult to come up with something to say. So, if you're ever out there and you see something weird or read something fucked up, let me know about it, because I need the inspiration. And I guess those are the things that inspire me -- weird, fucked up shit.


Or, maybe you need advice about something. You might not know this, but I'm very wise. Sage-like. So I can most likely help you with any of your problems.


So, email me at imyourkatieque@gmail.com (you can also find my email in my blogger profile by clicking my lovely picture directly on the right), and I just may feature your content or question on my blog. It will be like you're famous, except that the only people who will know about you are my Facebook friends. And probably only a small percentage of them.
Posted by Katie Qué at 12:17 PM No comments:

Summer just showed up out of nowhere, gang.

In honor of the suspiciously fantastic weather we're having in Boston this week, I'd like to share with you possibly my favorite SNL sketch of all time:
http://www.tudou.com/programs/view/-3yfHbYd1uY/ (<-found here)

Please note Cheri Oteri's line, "What's the deal with the AC fellas? Did it break? Fellas?!" because one time in college, when I was at a frat party sweating my ovaries out, I yelled this out. I was then promptly SCREAMED AT by some fraternity brothers who apparently didn't find me funny. I can't even describe the rage. The absolutely unnecessary rage. But, I guess Beta never liked me that much. Perhaps because at another one of their parties, I stepped on a wire and accidentally caused all of the music/lights to go out. Woopsies.

Email ThisBlogThis!Share to TwitterShare to FacebookShare to Pinterest
Labels: SNL

The Rain in Spain Falls Mainly on the Plain

I actually think that's pretty true. When I was there, it was sunny and 70 every day, and I was told that it hasn't rained in Spain in months. However, I did notice some grassy fields during my train/bus rides between cities.


On that note, the train ride from Caceres to Madrid felt like a roller coaster ride in hell. For roughly two hours, I experienced sheer terror.


The area between Caceres and Madrid is mostly mountains and farms. If we werent crossing some tiny bridge (probably built in the 19th century) between mountains, then we were in a tunnel driving through one. At one point I looked to my left and just saw clouds. While the train was wrapping itself around the side of the mountain, I was clutching the arm rest for dear life, as if that would do anything.


You see, I don't like heights. You might think that's ironic since I love skiing, which involves going to the top of a mountain, strapping blades onto your feet, and speeding down. But, I usually cling to the bar on the chairlift until it's absolutely necessary to lift it.  I'm generally terrified of being up high. Remember my experience in Disney World? I literally sobbed on the Tower of Terror.

But at least in Disney World, I had someone to hold my hand. Unfortunately, this time, I had no ally. I was just surrounded by a bunch of Spaniards reading and playing on their phones as if we were not on top of a fucking mountain. Meanwhile, I was silently panicking, but decided that crying wouldn't have been received well, so I held it all in.


I thought for sure I was going to throw up, but thankfully I did not. Especially since I can speak approximately six words in Spanish and none of them would have helped me explain that. "Umm, lo siento... Como se dice vomit?"

Hola amigos! I am back from my fantastic trip to Spain. Did you miss me?! I'd like to think you did. So if you didn't, at least pretend. I'm fragile, you know.


So, of course, my account of Spain will mostly involve all of the food I ate. You know how I roll. One of the best things about Spain is how much the people there love bread. One day, I ate an entire baguette by myself. Like a whole loaf of bread. It was delicious, freshly baked, and approximately 40 cents. Everything there is so cheap, I couldn't get over it. A typical glass of wine is the equivalent of $1.50. A DOLLAR FIFTY. I already drink so much wine in the States, I can't imagine what would happen if it was $1.50 here. (I'd be a drunk, that's what would happen.) 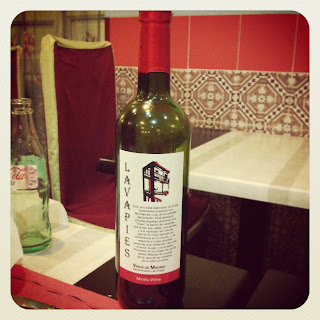 The entire time I was there I just kept asking myself and everyone around me how Spaniards are so skinny. They eat chocolate for breakfast. Melted chocolate in which they dip fried dough. For breakfast! Also, it's nearly impossible to find vegetables there, and things labeled "vegetarian" have ham in them. Nutritious. Yet, everyone there is little. This is astonishing to me. I eat one carb and blow up like a balloon. But, don't worry, that didn't stop me last week. I ate my way through Madrid, Seville, and Caceres. And I'll tell you what, I fucking love me some patatas bravas. 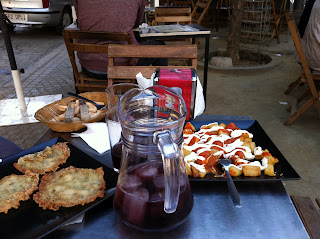 While I was in Caceres, I went to the school at which my friend Stephanie teaches English to 3rd-6th graders. Apparently, one of the classes found out about how I feel about food and presented me with some of the traditional dishes of Spain.

On that note, I felt like a celebrity while I was there. All the kids were so excited to see me, partially because I was their teacher's friend and also because I was a foreigner. They followed me down the hallway and shouted my name. At one point, they were literally pressing their bodies against a glass wall to look at me. They also did this:

This was all a bit overwhelming since even pairs of children make me anxious, nevermind gaggles of them crowding around me asking me questions. And of course, their favorite question was, "What is your boyfriend's name?" To which I had to respond, "I don't have a boyfriend" in very clear, precise English. Awesome.


One little girl asked me if I liked birds, and I answered, "No, I do not like birds" because I think they're fucking gross and scary. She gave me probably the dirtiest look I've ever gotten in my life. Sorry, Lucia. I wish we could be friends.


Anyway, although I loved Spain, I'm happy to be back. I got home and went to the grocery store and spent $50 on vegetables. Maybe that's why people don't eat them there.

This will be the first time I ever leave the continental U.S. I know, I know - you can't believe I've never left the country! Oh my god, that's so weird! Oh my god!


Anyway, in preparation, I've been practicing my Spanish. I'm visiting my friend, Steph, who told me I'll be fine because I was in Spanish Honors. Well, that was approximately 8 years ago; so, needless to say, I'm pretty rusty.


I decided the best approach, given my limited amount of time, was to focus on learning the essentials. I also purchased this helpful manual to carry around with me:


Here is what I have down so far:


Biographical information:
Me llamo Katie. My name is Katie.
Tengo veinticinco años. I am 25.
Yo soy Americana. I am American.
Pero, no soy un agujero del culo. But, I am not an asshole.
Yo broma, yo soy. Just kidding, I am.


Important questions:
¿Dónde está el bar? Where is the bar?


Preferences:
Me gusta comer. I like to eat.
Me gusta beber, tambien. I also like to drink.

Well, my friends, as you may have noticed, my blog looks a bit different today. No more La Petite Critique.


The thing is, I thought "La Petite Critique" was cute and charming and witty until I realized that there are about 1,000 other petite critiques to be found on Google. That shit was played out, so I had to use something a bit more original.


In case you were wondering where "i'm your katie que" comes from, I'll let you in on a little secret: When I was young and dumb, my AIM (remember that?!) screen name was "imyoursexbunny." Classy, right? 
Anyway, I remember introducing myself to my new "sisters," and since AIM was a major form of communication back then, they pretty much immediately asked me for my screen name. The moment the words came out of my mouth was the moment I realized that it was  not only completely inappropriate, but also entirely untrue. I don't even know how that screen name came to be in the first place. I was no one's sex bunny. Seriously, not one person's.


Also, what the fuck is a sex bunny anyway? Apparently this, according to Google:


Needless to say, imyoursexbunny had to go. But for some reason, I was afraid of changing it, as if somehow I would lose my identity if I had a different screen name. So I just modified it a bit, and ultimately, it became what it is today--much more appropriate and also a little bit ethnic.

Clearly, I've grown up a lot since college. Now, I'm a mature 25-year-old woman with a mature internet identity who binge drinks boxed wine and breads her cat.


Welcome to my renovated blog. I hope you still like it.
Posted by Katie Qué at 9:59 AM 4 comments: