I love love love Fall. It is without a doubt my favorite season. That probably makes a lot of sense since, in literature, fall typically represents death/dying, and according to most you reading, I'm "emo."

In addition to morbidity, fall encompasses some of my very favorite things. For example:

This year, I will finally live my dream and be a witch for Halloween. Not only because I've always wanted to be a witch (And by wanted to be a witch I mean believed I was a witch until approximately age 22 when I came to the sad realization I was never getting my powers on my birthday like they do in the movies. God damn it all.), but also because I spent $7 on a witch hat fascinator in Salem and have a saucy black dress hiding in the back of my closet. 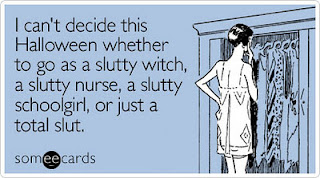 Now, while I love witches and magic and general mysticism, I am absolutely terrified of almost everything. For example, last year I was FORCED AGAINST MY WILL to enter a haunted house in Salem which resulted in me crying and screaming, "You can't touch me, I'll sue you!" at anyone within earshot.

This has been the case since I was a little girl. Once, my family went to Belcourt Castle in Rhode Island and upon being greeted by a somewhat creepy individual, I burst out crying, causing my dad to have to sit in the car with me for an hour while the rest of my family enjoyed the tour. What a good dad. I also once threw up and peed on him simultaneously during a thunderstorm*. I promise I've grown out of that fear. Unless you're into that kind of thing.