Steve Jobs is gone. And now so is my halloween costume. I was thinking about being Steve Jobs for halloween since last halloween, but that seems inappropriate now. Then again, after Steve Irwin died, he became the most popular halloween costume of 2006. That said, my friend Kyle thinks that the costume industry was behind Jobs' death. We expect to see a rise in the price of bald head wigs very soon.

But seriously, I haven't been sad about a celebrity passing since George Carlin. And although you may remember me saying that "Steve Jobs ruined my life" because I was unable to update my iPod a few months ago, I didn't mean it. He improved my life. Without him, I couldn't constantly validate my self-worth by checking my Facebook notifications and Twitter mentions on my iPhone. 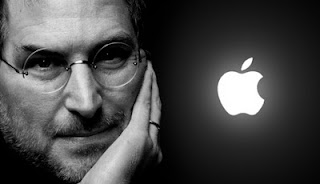