Yesterday was my parents' anniversary. They have been married for 38 years. That's, like, disgusting. They met in high school, which stresses me out more than necessary because I have this fear that if you don't meet someone in high school or college, then you're totally fucked. Or not fucked, whichever way you look at it. 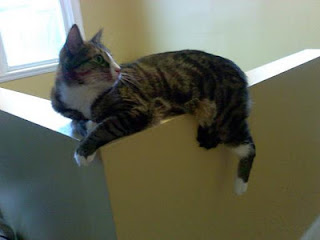 Although I'm not sure I would want to be married at this current point in time, I am concerned I may spend the rest of my life with only my cat. Did you guys know cats live for like 18 years? That's absurd. I didn't consider that when I adopted Boo. He's kind of reckless though, so maybe he won't last that long. I mean, not that I want him to die or anything; I love him. But sometimes I'm like, "holy shit, you are so fucking annoying," ya know? Maybe parenthood should not be in my future.


But seriously, I really do like him. The other day my roommates asked me if I had to give up cheese or Boo, what would I do? I was like, "Sophie's Choice!"  Because in case you didn't know, I fucking love cheese. Like, more than people. Especially goat cheese. I could bathe in that shit.

But ultimately, I decided I would give up cheese over Boo, so don't worry, everyone. I'd most likely resent him for the rest of his life, though.