The most successful relationship I've had to date is that with my over-sized Tigger stuffed animal that I've had since I was a child. He sleeps with me every night and never asks me any questions. He's also a husky ginger, which, as many of you know, is my preferred type. 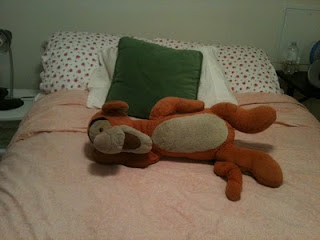 In college, I lived in a sorority with 45 girls. We all slept in the same room. Always naked, always pillow fighting, always exactly how you picture it. Except not really. On most mornings, my sisters could find me laying in bed with Tigger resting on top of me. Is that weird? They thought that was weird. I just like to be underneath something when I sleep. Listen, we don't need to talk about this anymore, alright? The point that I'm trying to make is that I'm going to Disney World this weekend.

On Wednesday and Sunday nights, the church next to my house screams in Portuguese about Jesus for 4-6 hours. Now, when I say "next to my house," I literally mean directly adjacent to my home, as in right outside my window. As in after the sermon is over, various people are yelling "Carlos!" into my bedroom. I don't know who Carlos is, but he is desired by many. He is also not in my room, so stop asking.


Tonight is Rosh Hashanah, and as a wannabe Jew, I feel entitled to some peace and quiet, but they will not cease. In response to the high-volume gospel, my roommate has developed a dependency on alcohol as she feels it necessary to drink a bottle of wine twice a week just to be able to fall asleep. She wants to file a complaint, but we're not sure if it's socially acceptable to formally complain about a church. However, these people are chanting until 1 in the morning on weeknights and that's fucking absurd. Do you think Jesus wants to be up all night listening to this bullshit? Doubtful. I read the Bible and he specifically said you should pray in a closet--quietly, privately, and not near my house.

My Sorority Has a Last Name

Do you guys watch Sister Wives? It's like Hoarders except with humans instead of animals. This guy has 4 wives and 16 children. They do not appear to live in squalor but their lives sure are chaotic. Take, for instance, the fact that they were kicked out of the state of Utah on account of their lifestyle. Wait, isn't Utah also home to this guy?: 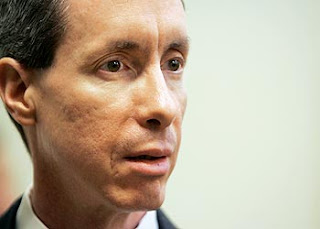 
Anyway, Kody and his clan had to relocate to Las Vegas, Nevada where they could practice their religion within a more accepting environment, one which embraces other moral practices, such as gambling and prostitution.


The women in this show are constantly contradicting themselves. One minute they're talking about how much they love the relationship they're in and the next minute they're crying because someone else is pregnant with their husband's child. It's confusing.


You may ask yourself, why would anyone ever want to be a sister wife? Well, if you're going to ask yourself that, then you should also ask yourself this: What's worse: a sister wife or a cat lady? Hmm, polygamy doesn't sound so bad now, does it? My roommates and I have collectively agreed (or at least that's how I interpreted it) that we would all rather be sister wives than single for the rest of our lives. While it is slightly troubling that we would all be sleeping with the same man, we think the risk of disease is pretty low, so really what's the issue? Then again, it's also pretty clear to me that sister wife #4 has oral herpes (check it out). So, I guess I'm  going to hope it doesn't come down to polygamy, not only because it's illegal, but also because Mormons seem to really like kids (by that I meant having them, but you can really take that whatever way you want) and pregnancy is my absolute worst nightmare.

The other night, my friend said to me, "You're like the son your father never had." I found this interesting because:
a) I have a brother, and
b) I also have a vagina.
Allegedly, he was referring to my interest in sports (watching them, not playing them. The only sport I excel at is flip cup, and apparently that's not a real sport. I did used to figure skate, though, so I guess that was athletic. And, now you can all picture me like this: 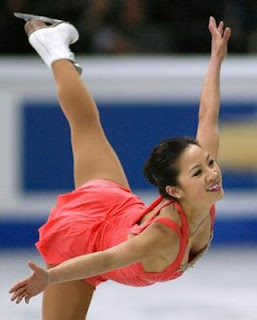 except just slightly less Asian. I say slightly because I would like you to envision me with perfect hair, skin, and nails. This is still parenthetical, by the way). While I do love sports, they also make me cry*. And crying, I've been told, is pretty girly, so I've got that going for me. Other feminine qualities I possess:
I've said it before and I'll say it again: Susan B. Anthony is a dick. If it weren't for her, I'd be vacuuming and drinking wine spritzers on my husband's dime by now. Although, I suppose I could be vacuuming right now. In fact, I absolutely should be vacuuming right now; I live in squalor: 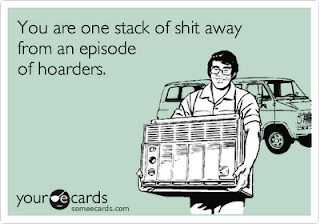 
Perhaps it's not completely Susan's fault, but I'm still going to blame her because I like to project my problems onto others.  See?  I told you I was girly.


*For more information, see the AL East standings and/or yesterday's Pats game.**
**I started writing this before the Sox's win against the Yankees last night, so I should give them a tiny little bit of credit.
Posted by Katie Qué at 10:18 AM 3 comments:

Email ThisBlogThis!Share to TwitterShare to FacebookShare to Pinterest
Labels: Hoarders


I've also developed an inappropriate crush on her: 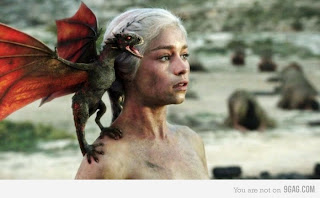 Now, I know I'm constantly worrying people think I'm a lesbian because I wear glasses, so I probably shouldn't be publicly proclaiming my attraction to a woman, but she fucking births dragons, okay?


Also, when I say I worry people think I'm a lesbian, that's not because I'm a homophobe -- I know there was some confusion about that with my last blog. I love the gays. I'm all about the gays. My own cat is gay: 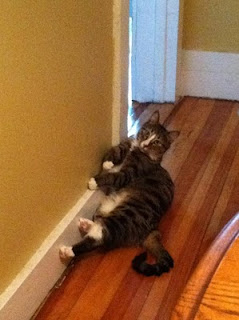 I'm just hoping that one day a man will be attracted to me enough to marry me and make me his housewife so that I can  bake all day and also not have a job.
Posted by Katie Qué at 12:55 PM 1 comment: 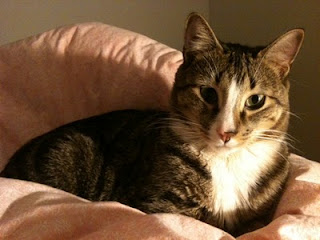 But it's not his fault, OK? He was left on the train tracks as a child. Adopted by a drunk girl. Growing up in a single-parent household. Desperate for a father-figure.

He also has body image issues. Every morning, he can be found here: 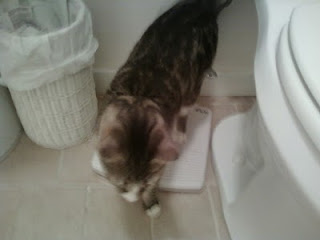 Can you see the guilt in his eyes? I can't believe I ate the whole can.

Sometimes his mom makes him run up and down the stairs. She does it out of love.

Sometimes he poops just outside his litter box. This is to show her who's boss. Then she screams things at him like, "I wish I never had you!" But she doesn't mean it.

Later, he will let her pet him. She will feel loved. But, within seconds, he will scratch the mother-fucking-shit out of her. But she will always go back for more. And the cycle goes on and on.
Posted by Katie Qué at 11:36 AM 4 comments:


Skip ahead four posts and three years later and I think we can determine that that statement was FALSE. While I haven't actually written anything in quite a while, I think about blogging every single day. But, I also live with the constant fear that anything I write could be used against me, especially since I often say things that could be deemed  "politically incorrect" or "offensive" or "cunty." See? However, my roommate assures me that freedom of speech is still in the Constitution, so I should be safe. Then again, separation of church and state is also in there and I'm pretty sure that one gets overruled on a daily basis. So now you see my internal conflict first-hand. But still, I think I might give this another shot.